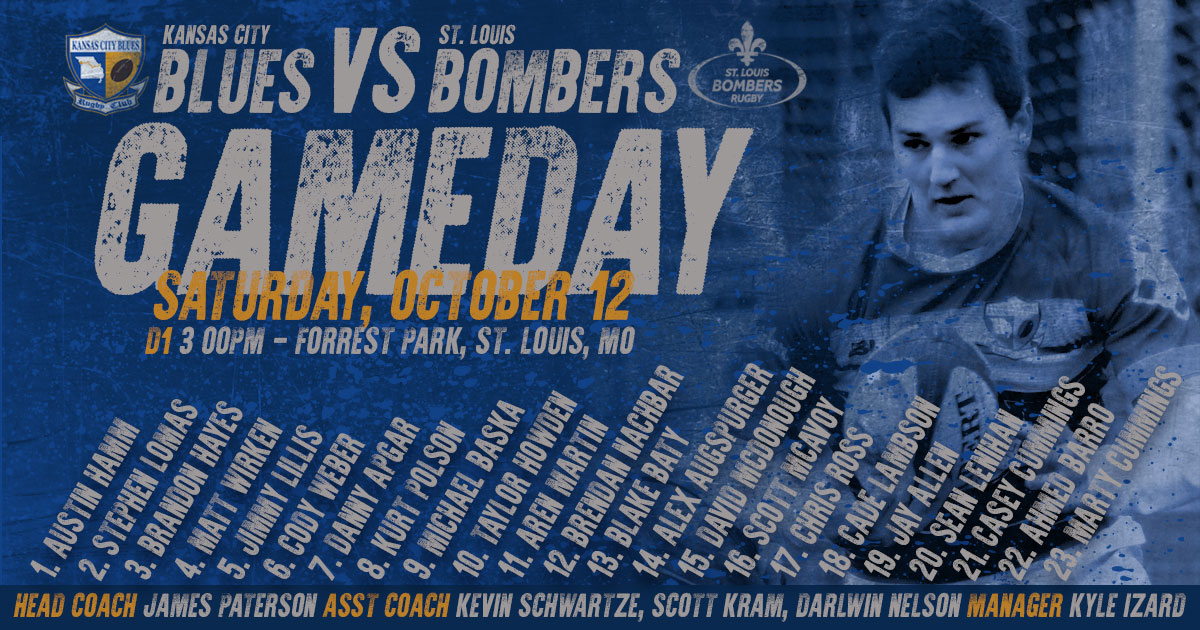 NOTICE: SATURDAY OCTOBER 19TH: GAME HAS CHANGED TO AT METROPOLIS.

The remaining Fall schedule is as follows.

The Kansas City Blues traveled to St Louis to take on a revamped St Louis Bombers roster last Saturday.  The sky was clear and the new Emerson Central Rugby fields were green on a beautiful fall day for a Midwest Premiership game in America’s Heartland.    The Blues kicked off to start the game and after a returning kick to touch and a successful front lineout the Blues drove right down the field off of strong runs by Cody “Warchild” Weber, “Sleepy Dave” McDonough and pinned the Bombers within their own 5 meter with a precision kick to touch by Taylor Howden.  The ensuing clearance kick was pressured and Blues regained possession at about the 40 meter line and pounded the pill with patented Blues pistons and trains until the defense sucked in enough for a beautiful grubber off the foot of Howden and touched down in the try zone by Alexander Augspurg to open the scoring.

Later in the half big runs by Kurt Polson and Jimmy Lillis set the Blues up for more scoring opportunities.  One such opportunity was pounded into the try zone by the Blues’ own entrepreneur Stephen “Goku” Lomas.  Brendan Nachbar and Blake Baty also teamed up for a flowing attack that resulted in a try that could be mistaken for a RWC highlight from the likes of NZ or Japan.  The Bombers lineup however, which was massively renovated between the opener, did not hang back and accept the punishment.  A clever dummy switch pop play off a 10 meter srcrum to the blind side winger put the Bombers into the try zone for their first score of the day.  The Bombers added another try and a penalty kick for points to their scoring plays, but The Blues held strong and ended the half with a score by who else but the crazed barbarian with the long hair and scrum cap Cody Weber. With a quick side step back inside off a tight spiraled pass from Michael Baska from a Blues lineout, Cody put the Bombers defenders on ice skates and dove into the Try zone.  Blues led 24-17 at halftime.

Not to be outdone by their cross state rivals, the Bombers came out in the second half with renewed vigor.  Kansas City spectators reported glimpses of Bombers players taking drinks out of green Gatorate water bottles with the words “Michael Jordan’s Special Stuff” written on the side which may or may not have given them the rugby equivalent of Paul Walker hitting the NOS button in the critically acclaimed “Fast and Furious” movie series.  These reports have not been confirmed but nonetheless the Bombers’ South African 12 Wesley White played like a man possessed running hard and fast in the second half which resulted in a try and conversion for the Bombers.  With that try paired with not one but two penalty kicks for points the Blues found themselves down 30-24 with the clock ticking dangerously close to full time.

However, as any hardworking Missourian who enjoys the “Fast and Furious” movie franchise knows all too well, Paul Walker has a habit of hitting the NOS button just a little too early, which leaves the end of the race open for none other than Famed Blues fan Vin “XXX” Diesel to close the distance and pull in front for the checkered flag finish and win.  Well Saturday was no different folks, as a late Blues drive which featured strong and calculated runs by Taylor Howden, Stephen Lomas and physical cleans by our favorite long haired animal Cody Weber and Classic Blue throwback Jay Allen, culminated in a penalty which Michael Baska took quick, beat a defender and then dished the pill to USA Eagle Aren Martin for the try in the corner.  However, the drive was not finished as that corner try left the Blues one point down and dependent on a very difficult conversion attempt needed from scrummy Baska.  The newly shaved head allowed Baska to feel the wind and he put the kick up and to the right of the posts, which allowed it to catch said wind and float left right between the posts to put the Blues up 31-30 with less than 5 min left.  After some pounding short balls to retain possession, Baska used that same clever foot to kick the ball to touch with time expired to seal the deal for the Blues.

After the game the Blues gathered with their Saint Louis Brethren for good food, good drink and another bonus on the day, a Game 3 Cardinals loss to the Washington Nationals!  All in all a great day for the Kansas City Blues and their city.  The Blues travel to Minneapolis this weekend to take on second place Metro RFC with the fate of the Midwest Premiership in the balance.

This past weekend the Blues second side was fortunate to fill a bye weekend with a game put together against K- State in Topeka, which would highlight the newer guys on the squad. With such a young group, the Blues had highlighted some “work ons” for the boys to focus on come game time. They executed them tremendously. The focus was executing pattern and being patient with ball in had, especially after a line break.

The Blues opened up the game going up 21-0 in the first 15 minutes before the first set up substitutions. Gavin Kirk came on for Connor Burke at Flyhalf and had great game with ball in hand and for conversions, without a tee he stroked drop goals from all over and went 5-7 on the day. Gavin played the ball out the the backs where Ryan Ellison, Tonderai Kambarami, and Dairyess Collier all had great days. Josh Frazier performed well at 9, including a remarkable run, side stepping multiple defenders and generously gave the try to Joe Mocha to dot it down.  Chase Higgins had the biggest impact on the day with his Man of the Match performance. Chase broke the gain line nearly every touch and made some big defensive plays as well. By half the Blues were up 33-7 and finished the game with an additional 40 points to win 73-7. 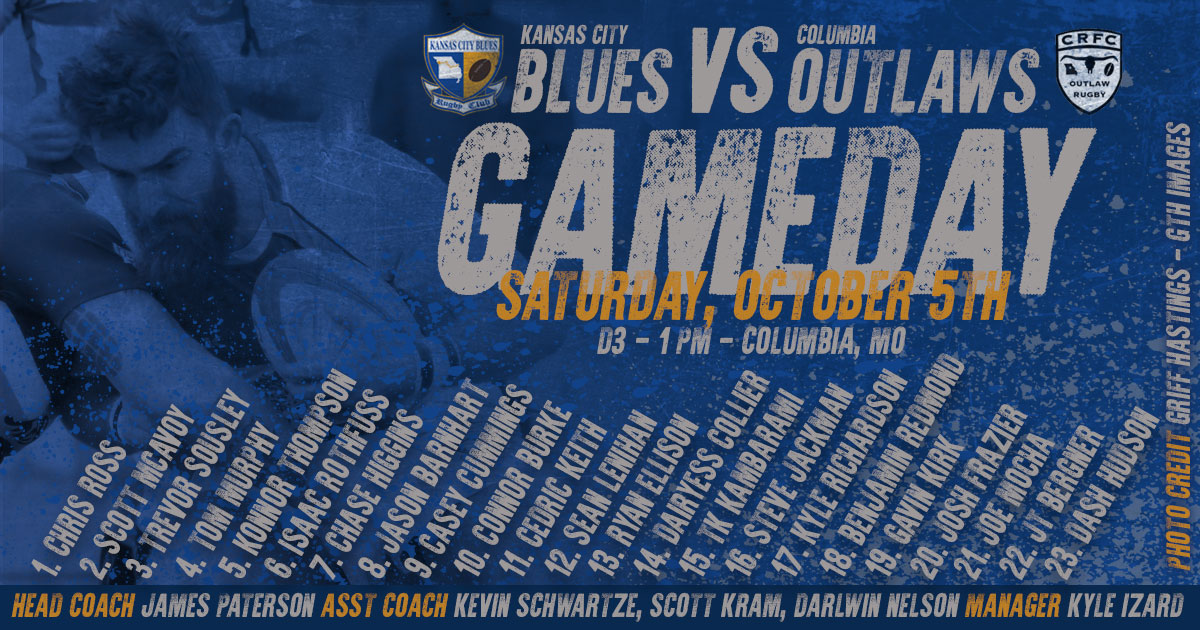